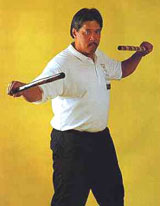 :: A seminar of the special kind with GM Latosa in Velbert ::

15.05 - the last participants arrive and Grand Master Rene Latosa (USA) welcomes all participants briefly. The participants came again from whole Europe - Germany (Hamburg, Cologne, Frankfurt, Stuttgart, etc.), France and one participant travelled especially for this day even from Prague. Grand Master Latosa had announced far earlier to teach the deeper backgrounds of disarms and their practical values as well as the transition into the unarmed work of Escrima - also therefore the expectations in regards to this seminar stood high and were, according to the feedback of a majority of the participants, more than fulfilled. A participant expressed himself even in such a way that this class was much more valuable than expected.

The impressions remained deep - first GM Latosa once again began to work on basic knowledge in order to bring all participants that came from the most different organizations and associations on to the same level. After approx. an hour the subject turned immediately into the disarms part, where he technically worked two typically traditional disarms with the participants and then split these up into their significant motion exercise components, so that every participant realized that disarms are unsuitable in practical approach due to the high risk involved, remain however and nevertheless an important and valuable fund to practice the own physical development as well as to improve the understanding of the exercise process. For most participants the disarm introductional motion at this point where a small turn of the attacking arm through the own hand became a real offensive movement and in this way a new understanding of the concepts. What looks rather complicated got a whole new comprehensive meaning through his explaining dissection.

After the pause of the seminar half-time the until then new ideas were transitioned into the unarmed training - Cadena de Mano. The coaching mitts became frequented during practice so that every participant could better feel his own body. Using also the mitts differently as an attacker in order to constrain a reaction from the partner brought new thoughts to everyone.

The atmosphere was very constructive, the good feedback from many participants of the seminars with GM Latosa over the last years in Velbert had spread very positively in the European scene and is in the meantime established as that as well. Through that Velbert wins in addition to his lock and hardware industry - which is internationally known - a further international highlight.

All in all a successful event and we look forward already now to next year when it is again: Grand Master Rene Latosa comes - and everybody knows that it will be again a seminar of the superlatives.