For 30 years we are benchmarking the teaching of Wing Tsun and Escrima!
| Links | contact | Impressum |

The easy way of getting your personal introduction into Escrima...

Escrima is self-defense in the most consistent form with objects,
being handled armlike

Self-defense with blow and thrust arms is as old as the human civilization. Already long before the first metals could be processed, the human being used sticks, clubs or large bones as striking arms. This ability increased his combative multiplied his effectiveness immediately.

The existential advantage drove the development and refinement of the striking and cutting arms and their effective use forward for over millennia. First with the invention of the firearms this progress was brought more or less to the standstill.

In the current European societies the self-defense received a new significance by means of striking arms since disadvantages at physical strength and measures can very much indeed simply be compensated by arm use, the same one, however, succumbs to severe laws.

Generations of capable Escrimadores developed from a philippine combat style a modern fight art on arms that is accords totally to the requirements an effective self-defense method in a western society.

Escrima today is a principleorientated form of self-defense with everyday objects, traditional arms from the Philippines and medieval arms from Europe. The universal concept behind this combat art is used also like in the Wing Tsun for the solution of all attack situations. 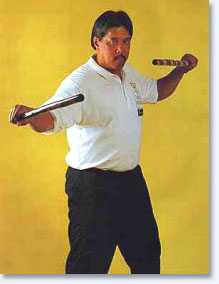 The usual training arm of the Escrimadores is the rattan stick. During all exercises the pratcitioner should be conscious that the stick is led symbolically in this case representative for the most different blow and thrust arms. In the traditional Escrima those ones are particularly machete, Bolo, dagger and similar blade arms.

The Escrima-principle of the transferability of stick techniques onto other arms binds European arms in which appear today more "exotic" to some Escrimador than those of the far Asia. The Escrimadores can train with massive antiquated arms and by this experience not only an impression of past times, but also increase their technical repertoire through the great number of used practice devices.

The training forms a maximum on dynamics and reflexes in order to defelct armed fast attacks.

Basic principle of the martial arts of Wing Tsun and Escrima is:

"A good self-defense must offer the average citizen - also women and girls - the optimal protection, however without building up the precondition of physical strength and stamina. The motto: One does not need any blocks, if everything is done correctly finds central importance.