Which young man has not once dreamed of making his hobby to his profession and by by this instead of following a solid and sound job to try a career as professional teacher of martial arts or combat sports?

When young active martial artists are asked the number of persons who have already turned a thought or two in regards to this topic could probably amount to over 90%. How does it come that this desire has developed itself in the scene? Why is this desire more spread than ever? Does this not officially acknowledged profession (by state in Germany) offer a real solid basis? Is it really much more comfortable in life with a professional outline like this than with standard jobs?

The actual sprit of time does show a strong incline towards a desire for job activities that bring professional, financial and social success in an easy and relaxed manner. This is more than understandable because this train of thought does touch the most inner core of human emotions towards stressfreeness and relaxation in conjunction with simultaneous experiences of success.

Hereby the following factors have a decisive influence in today's world on the intensity of activities: financial success measured against persons that lead and manage successful enterprises for over decades, social recognition that coincides with financial success, self realization, independence, security.

Because today's society members are born and do live from their youth on in an environment whose structure is always competetive amoung its members the above mentioned criteria will become the driving forces of acting and working. Only all to often such phenomena that are also called complexes when lived chronically and negatively are very evident. For example it is said that small men do like to compensate through socially recognized high class substitutes their appearance as a big man of action. Or the old man as well as women that try desperately to demonstrate youthfulness by dressing like a teenager or teenage behaviour. The behaviourial psychology does know a lot coloured schemes that become even more numerous by today.

What has all this to do with the profession of a martial arts/combat sports teacher? In this in Germany not officially acknowledged profession imaginations do unite like: social recognition, easy financial success, stressfreeness because it is executed in a leisure time character, distinction from standard professions through being DIFFERENT, the physical superiority as as demonstration of the superiority of the psyche, making his hobby his profession, etc.

If a young person now asks as job veteran over his experiences and gets to know that in a professional life success only comes from hard work, suffocation of stress over a long time and so on, than it will become evident that a more easy way is more likey to be taken or switched to if not already anchored somewhere in a job.

If played with the thought of taking this way then it must be considered which assumptions are mandatory for such an activity. Because the profession of an martial arts/combat sports teacher is not an official one so the catalog of mandatories towards the basic skills are not given. If by now the most important skills like the technical and physical ones are left aside then the question must be raised: which are further nessecary core competencies in order to conduct a sucessful professional activity? 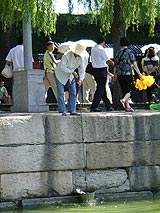