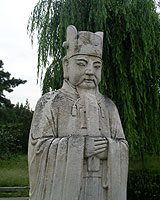 The famous situation "David against Goliath" is actually the nucleus structure of every logical martial art? How does this come? 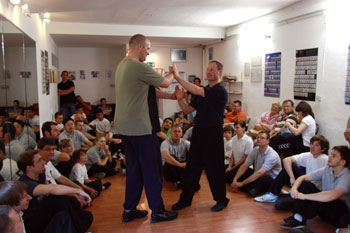 Every human being will understand, that if standing in front of a potential violent criminal who overshadows himself "visually in physique" is by this actually standing on lost ground. The consequence of this visual perception - in analog mode as in the animal realm - is going into a stiffness, which however, renders us incapable of any action. This stiffness refers to the psychological as well as to the physical constellation. Meaning that the psyche when being affected first leads immediately to a physical impotence. A further analogy from the animal realm would be that for example a predator such as the tiger chases smaller wild animals as prey and larger animals only in the herd of peers. There are, however, no field reports that a tiger alone attempted to bag an elephant.

If being exposed to such a situation it is instantly evident that the available physical means and strengths can keep up only relatively. The superior aggressor has even further means available. Therefore it is only far too logical to compensate the available further means of the aggressor or even better almost to bring them against zero by skillful action.

The only probate means in this case: technique. Technique to make a physically more superior aggressor become incapable of action through the use of only available physical resources if the situation demands so.

How must this "technique" now be structured?

While considering the power ratio it gets obvious that the high objective is to build up and use no own "overabundant force" as this would be insufficient in any case. Therefore the objective of using the available strength resources optimally should be pursued that through suitable movements the "overabundant force" of the aggressor can be decreased against "zero".

This means that the "powerlessness" of a technique represents the noble objective. Now the concept of the powerlessness is interpreted, however, as "pressurelessness" very frequently in practice. How does this come and what are the effects?

With powerlessness the ability is meant to cause a volume of dynamic movements that lead to high dynamic motions through the available muscle potential. This is possible without any further ado but must be trained for long and persistingly. What happens, however, if the respective body part meets resistance? Well then a pressure situation arises that has to be analyzed and to be used.